Oman is one of the safest and peaceful countries in the world that offers beautiful destinations, eco-tourism and a plethora of adventure activities for travelers. Oman has culturally rich heritage with amazing forts, palaces, souks and cuisine. The population of Oman is over 4 million, out of which 1.76 million are expatriates. Majorly the Omani society is tribal that comprises various tribes of Baloch, Al Lawatis and people from Zanzibar region. Arabic is the official language of Oman. As per travel guide Lonely Planet in 2012, Muscat- the capital city has been highly praised as the second best city to visit in the world. This is beautifully surrounded by mountains and desert, the city seamlessly blends culture with modernity. It’s the Middle East as you would have never imagined. For many this is a perfect stop over destination. 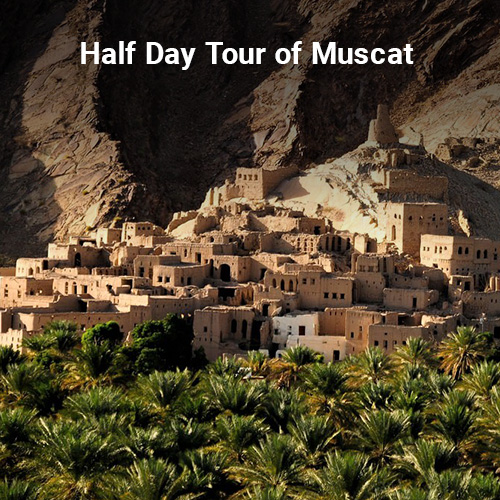 Half Day Tour of Muscat

Muscat is a beautiful city with rare blend of ancient & modern. This city lies in a maze of brown pleated Mountains. This city also takes pride in the fact that it has preserved its lustrous culture & heritage. The tour starts with a drive through the ministries’ area, where you can see a number of modern buildings with touches of ancient, Islamic architecture. You will visit the Grand Mosque, fish market and Muttrah souk, with its narrow covered alleys where you can smell exotic aromas of mounds of spices, coffee beans, and ancient remedies, all enticing perfumes that fill the air. You will also visit to the Bait Al Zubair Museum, which has a fine exhibit of Omani history and culture, encompassing all of the areas’ traditional values. 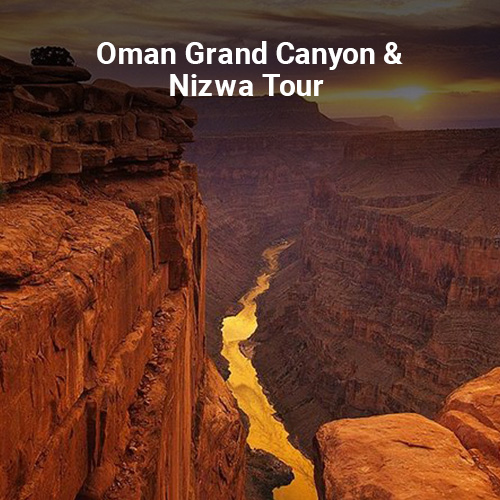 The tour will start through the Hajar Mountains to the township of Nizwa, the ancient capital of Oman. At Nizwa we will take you to Nizwa Fort and the Traditional Souk. After this we will travel through the deep Wadi Ghul and arrive at Jebel Shams “Mountain of the Sun” the undisputed lord of the mountains. The highest peak of Jebel Al Akhdar mountain range, soaring 3,000 meters above sea level is Jebel Shams. This peak provides a spectacular scenery, ancient rock carvings and remote villages. This is the Grand Canyon of Oman. There will be time to experience some of the breath-taking scenery before continuing to the beautiful old village of Misfah. After this we will explore the ancient labyrinth of the region of Al Hamra before we return to Muscat. 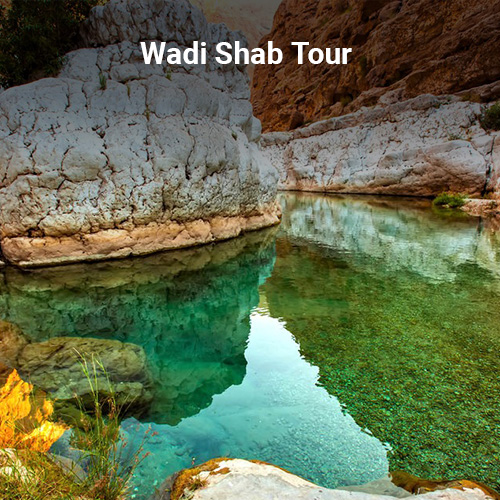 Wadi Shab is perhaps the most beautiful and unspoiled valley in Oman. Bright turquoise waters flow through tall canyon walls of orange and yellow sandstone, over rocks and into small pools and waterfalls, and a refreshing swim in the cool, clear water is a highlight for most visitors. You will feel that you’ve found your own personal oasis in the middle of the desert, though the wadi is popular with both locals and tourists. Outside of exploring the natural beauty of the emerald-green pools of water and large rock formations, there is a partially submerged cave to see. The floor of canyon is dotted with lush greenery, and the area is surrounded by date plantations and banana trees. 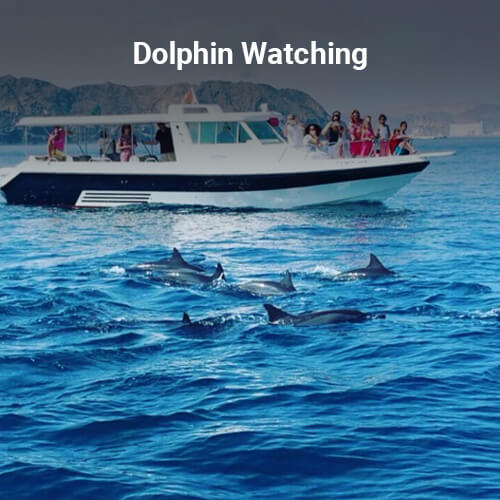 Muscat and Musandam are famous for dolphin watching as Dolphins visit the shores of Oman in large numbers each year. An early morning boat trip is an excellent way to experience them at close quarters and on this tour you will be able to see Indian Ocean Dolphins, Indo-Pacific Humpback Dolphins, Russo’s Dolphins, Common Bottle Nose Dolphins and may more. While exploring dophins you will also have the chance to view the beauty of Oman’s coastline and experience the beautiful views of some of the landmarks. Once you have enjoyed watching the dolphins you can come back to land or extend your day on the water. 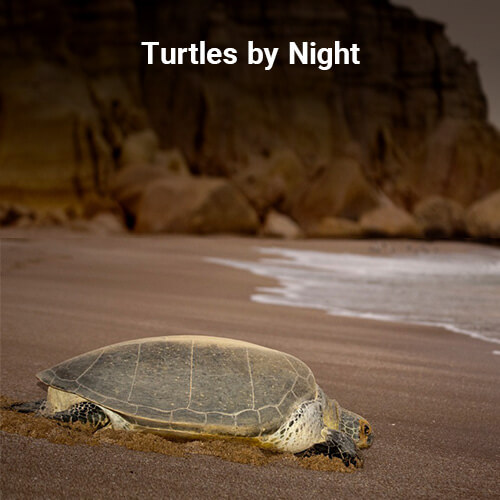 This is a two-day tour where you will get the opportunity of visiting Oman’s seaside villages, spectacular Wadis, awe-inspiring sinkhole, dazzling desert sands and a once-in-a-lifetime opportunity to go turtle spotting sanctuary. On day one, we will have lots to cover, visiting Quriyat, the Bimah Sinhole, Wadi Arbayeen and more before head to the turtle reserve to spot turtles during the evening. One day two, we will drive towards Wadi Bani Khalid, which is a desert paradise. It is an oasis in the middle of date palm trees with of a network of pools and sparkling blue water surrounded by intimidating rock valleys. The wadi is home to numerous pools with absolutely crystal-clear sparkling waters and some parts of the Wadi are home to a network of tiny caves. 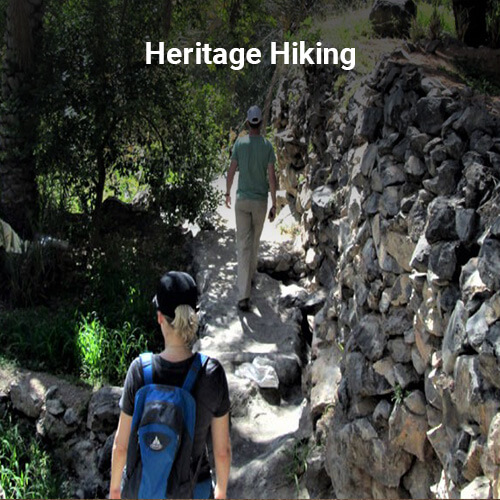 This tour takes you on an easy hiking trail through the foothills in Al Hamra. You will be hiking on easy paths and small trails, which are suitable for beginners also. A lush green oasis will be the first stop on this hike where you will find a small green refuge of serenity with tall palm trees swaying along with the wind. After this we will visit the museum to learn about the history of the place, after which we will continue on the popular well-demarcated hiking route up to the beautiful mountain village of Misfat Al Abriyeen, which lies hidden away in the hillside.When you reach the village, we can assure you to have some truly spectacular views from here and you will also get the chance to see the traditional Falaj irrigation system which is part of UN World Heritage list.

In the month of Ramadan, the working day is sometimes reduced to six hours.

Best time to travel: The weather is at its best from October through to April. Try to avoid scorching summer months between June and August.

Clothing: All tourists are generally made to feel very welcome in Oman, although in return tourist are expected to abide scrupulously by Omani cultural norms. Dressing appropriately is perhaps the single most important thing to remember. Women should prefer wearing loose clothing, with arms and shoulders covered. Skirts should reach at least beneath the knee. It’s also useful to carry a shawl to cover your head in more conservative areas. For men dress codes are less crucial. It is fine to wear below-the-knee shorts, although it’s best to err on the side of caution and wear trousers. For both men and women, it helps to dress conservatively, especially visiting the rural areas.

Omani Rial is the official currency of Oman. The Omani rial is subdivided into smaller units (1000) known as baisa. The Omani currency is found both in coins and banknotes form and is managed by the Central Bank of Oman. The rial was adopted in the early 1970s in place of the Indian rupee and as part of the modernization effort. The Omani rial is pegged to the United States dollar with the rate adjusted in 1986. The rial is the only legal tender unit in Oman with foreigners and visitors expected to convert their currencies to rial before they can make any purchase in the country.

The most widely spoken and official language in Oman is Arabic. However, the Baluchi language is also widely spoken in Oman. English is adopted as the second language as the city of Muscat is home of various expats also. Tourists have definitely no difficulty in communicating with the Omani people in English.