Thimphu, proud capital of Bhutan, nestled gracefully in pine covered hills on the western slopes of the Wang Chhu river valley. Thimphu city is a consolidation of a natural small-town feel with a new commercial eagerness that constantly challenges the country’s natural orthodoxy and wonderland image.Thimphu is Bhutan’s largest city, just an hour’s drive from Paro. This is also the only national capital city in the world to not have any traffic lights.Thimphu has many attractions such as Chari Monasteries, the Clock Tower Square, the National Post Office, the Motithang Takin Preserve, Tango and National Memorial Chorten, Buddha Dordenma, Centenary Farmer’s Market, Semtokha Dzong and many more. These form the most important tourist attractions in the capital still retains its cultural identity and values amidst the signs of modernization.

Paro is the gateway to Bhutan, if you come by air because the only international airport in Bhutan is located here. This picturesque region is one of the widest valleys in Bhutan and is covered with lush rice fields and meadows creating a magical view. The main town of Paro is colorful and it is worth taking a stroll from one end to the other.Paro has beautiful monuments, fortresses, religious sites and several astonishing places worth exploring. There are many handicraft shops, where you can explore Bhutanese souvenirs.Paro is truly a traveler’s paradise.

Punakha was the capital of the country from 1637 to 1907 and the first national assembly was hosted here in 1953. Punakha is also the cultural heartland of western Bhutan and all of Bhutan’s kings have been crowned here. One of the most fascinating temples in Punakha is the KhamsumYuelling and it has some exquisite wall frescoes. There are numerous temples, farmhouses and view points where one can go for day hikes. Punakha is two hours from Thimphu and some tourists make day excursions from the capital but most like to spend at least two nights there. The bird life is very rich with highlight being the white-bellied heron. This heron is Asia’s largest and endangered. Many migratory aquatic birds do visit the valley in winter months.

Gangtey valley is one of the most beautifulas well as glacial valleys in Bhutan. This wide and flat valley without any trees is a surprise to find after a difficult climb through dense forests and a rare experience in Bhutan, where most of the valleys are tightly enclosed.At an elevation of 3,000 metres on the western slopes of the Black Mountains, it is one of Bhutan’s few glacial valleys. A designated conservation area, it is the winter home of the endangered black-necked crane.Gangteng Monastery, perched on top of a small hill that rises from the valley floor, is taken care by the families of the village. It is the only Nyingmapa monastery on the western side of the Black Mountain’s and is also the biggest Nyingmapa monastery in Bhutan.

A small town of Mongar is situated atop a hill rather than within a valley. Road to Mongar is one of the most beautiful journeys in the country. You will pass over sheer cliffs and beautiful fir forests and green pastures. You will have the opportunity to visit the Rhododendron garden. On clear day you can even catch a glimpse of Gangkhar Puensum, a strong candidate for the world’s highest unclimbed mountain. Mongar town is considered the main travel and trade hub of eastern Bhutan. The region is also known for its weavers and textiles, the fabrics produced here are considered some of the best in the country.

Trashigang lies in the far east of Bhutan, on the bank of GamriChhu river. Once Trashigang use to be the centre of a busy trade route with Tibet, but today it is the junction of east-west highway with road connecting to SamdrupJongkhar and then to the Indian States of Assam. Trashigang is the country’s largest district, with an altitude ranging from 600 m to over 4000 m. This town is now a market place for the semi nomadic people from Merak and Sakteng whose costumes are unique in Bhutan. Trashigang is a 2 night destination from where a day excursion to Trashiyangste is proposed, another delightful quaint town of Bhutan.

This is one of the newest dzongkhags in the country, which was established as a distinct district in 1992. Trashiyangtse is full of wealth from nature, it has historical and cultural resources, which makes its a destination that visitors to Bhutan will never forget. Enroute to Trashiyangtse from Trashigang, a stop at the Gom Kora Temple is proposed. It is associated with Guru Padmasambhav who spread Buddhism in the Himalayas. With just about every religious place in Bhutan having to do something with Guru Padmasambhav, it can be given a miss to spend more time at the ZorigChusum – the school of the 13 crafts; a tradition which started in the 16th century though the skills existed much earlier, often passed down from generation to generation. ZorigChusum is a Bhutan government enterprise.

A religious heartland of the nation !Bumthang is home to some of its oldest monasteries and Buddhist temples. It consists of four main valleys, Chumey, Tang, Ura and Choekhor. The largest of the four is Choekhor and is widely considered as ‘Bumthang Valley’. Bumthang has an special character that charms its visitors and separates it from other regions. The fertile valleys are covered in fields of rice, buckwheat and potatoes. Dairy farms and apple orchards are also common sights here. This is one of the most peaceful and serene regions in the kingdom. 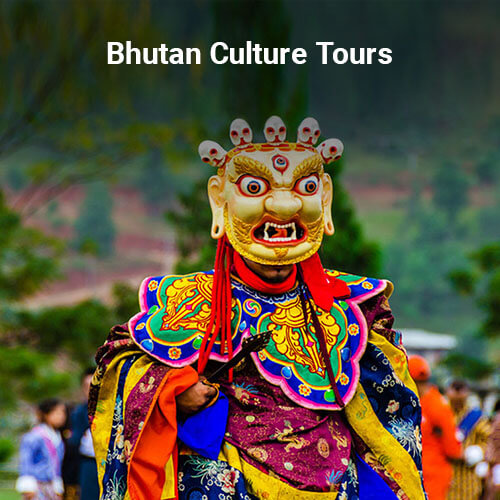 Bhutan cultural tour offers tourists the chance to discover some of its unbelievably inspiring places and culture authentically with multiple exploration and experiences. Bhutan is a small and remote country with an incredibly vibrant culture and traditions since the time immemorial. Bhutan is the only country where traditions and culture remained alive and continues even in the modern world. Culture is country’s valuable assets and act as a shield to its sovereignty. It serves as an everyday backdrop for life in Bhutan and something that every Bhutanese are proud of. The citizen has been defending the value of culture and thinks it is vital and responsible of every Bhutanese in honoring and upholding the values of culture and traditions. 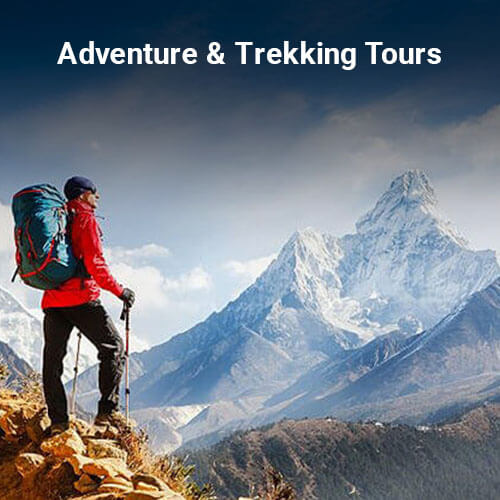 When it comes to adventure and trekking, Bhutan offers both beauty and variety. The kingdom of Bhutan is home to some of the most challenging high-altitude treks in the world, as well as countless easy rambles through the wilderness. A multi day trek in Bhutan meets the requirements of an experienced hiker and even of a novice. If you decide for a trekking, you won’t do it alone: you’ll be coordinating with our local guide. You can get highly involved in the planning process or leave it up to our guide’s expertise. If you prefer the latter, you only need to state your fitness level and general preferences, and the rest will be taken care of for you. 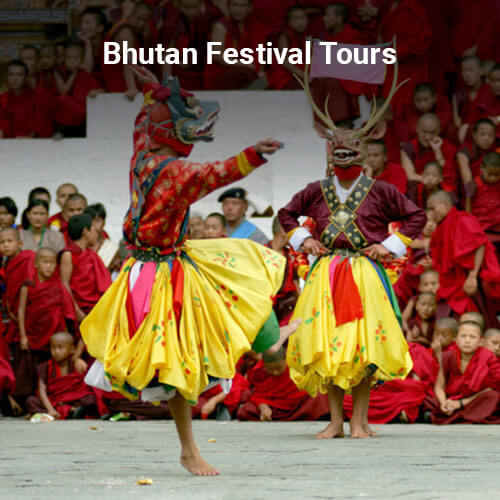 Bhutan Festival Tour offers you an opportunity to experience a wide range of lively and most vibrant festivals celebrated throughout the country. It will be the time to join the locals in their finest attires, receive blessings from scared ceremonies, or dress in Bhutanese costume and taste festival delicacies. Definitely a wonderful trip of refreshment and happiness, with a witness to the real Bhutanese culture of this landlocked country. Tsechus, as the most dramatic religious festival of Bhutan, are usually performed in the Dzong yards of different districts, including Paro and Thimphu. From traditional mask dances to folk music and rituals, Bhutan’s Tsechu festivals play an important role in the lives of the Bhutanese people. These festivals also attracts thousands of tourists every year. 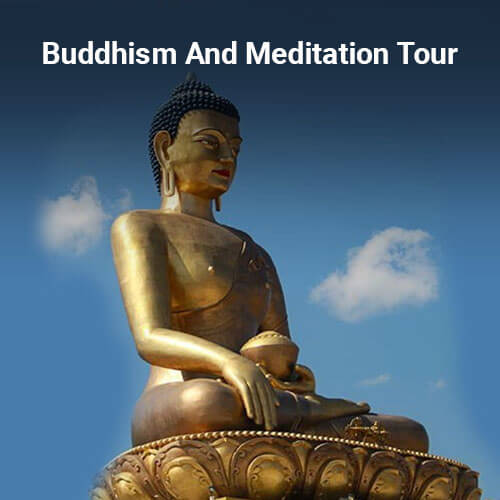 The Buddhist way of meditation have become increasingly popular in the world, with many non-Buddhists taking them up for a variety of reasons. This meditation encompasses a variety of techniques that aim to develop knowing the mind; training the mind; and freeing the mind. Meditation calms your mind. This tour will give you an idea about the stronghold of Vajrayana Buddhism which thrives and continues to become an integral part of Bhutanese culture. Among the Tibetan Buddhism, Bhutan is highly appreciated and respected for the preservation and promotion of Buddhist practice. Meditation and retreats are a crucial part of Buddhism practice and learning. 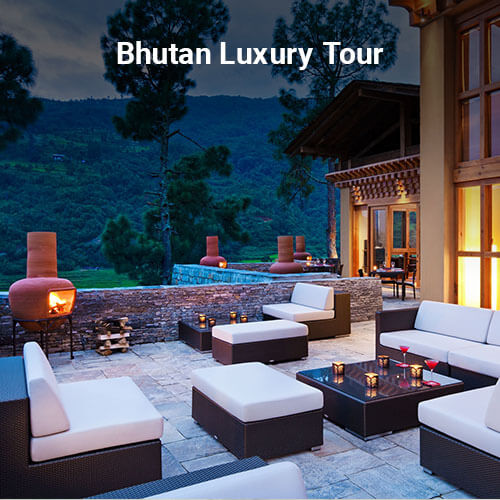 Experience luxury tour of Bhutan. You will have a cozy and exquisite travel across the country. You will experience the luxurious service from the day you arrive, till the time you leave the country. You will be accommodated in selected 5 star hotels in each destination are top rank lodges in Bhutan providing private villa and butler services offering personal privacy and comfort creating a luxurious experience in your lifetime. 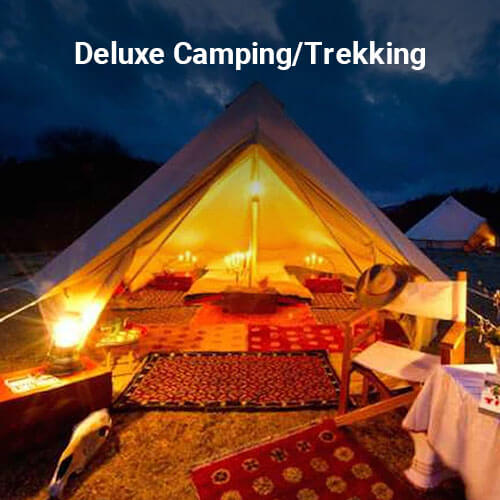 Deluxe camping tour is initiated and designed to offer the travelers with comfortable life in wilderness aloof from luxury hotel service. Our deluxe tent provides spacious interior, made from thick cotton canvas with poly fabric mix and steel poles for extra security, and offers benefits of keeping cool in summer and maintaining a higher temperature during winter. The itinerary for deluxe camping is designed along village sides where it is accessible to motor road as that demands carrying a lot of amenities and the heavy tents.

You will be required to obtain a visa clearance prior to travel to Bhutan. Bhutan visa can be processed through an online system by the licensed Bhutanese tour operator, directly or through a foreign travel agent.
Details can be checked by visiting – www.mfa.gov.bt/?page_id=9196

Indian, Bangladeshis and Maldivian nationals can obtain a visa on arrival (at the port of entry) after producing a valid passport with a minimum of 6 month validity.

Bhutan’s regular office hour is from 9 am to 5 pm from Monday to Friday. Saturday and Sunday are weekends. The standard time is 6 hours ahead of GMT and there is only one time zone in Bhutan.

The best months to visit Bhutan is from March to November, but you can plan a trip to Bhutan throughout the year.

In Bhutan there are several festivals taking place during the months of March till November. Winter in Bhutan falls from November mid to March mid, when the climate is dry and sunny, night is very cold and temperature can fall below to zero also.

Ngultrum is the currency of Bhutan.

Ngultrum is divided into 100 smaller units which is known as chhertum.

ATMs can be easily found in almost all main towns throughout Bhutan.

Bhutan uses 230V, with a frequency of 50hz, they use D, F and G type power plugs and sockets.

Dzongkha is the national language and the most widely spoken language, but they do speak a variety of languages also. English is also widely spoken by the majority of Bhutanese which makes a tourist life easy.