North India is every traveler’s fantasy and usually the entry point for a trip to India, It has many must-see destinations and it is every traveler’s fantasy visiting India. Many came and many stayed, enchanted by the land, and their staying has created a colorful, vivid mosaic that captures your heart and imagination. North part of India has something for everyone, from History, culture, mountains, adventure, Spirituality and much more.

South India can be defined through mesmerizing hill stations, majestic temples, lush green forests and best beaches. One can rejuvenate their senses by visiting the places like Kerala, Pondicherry, Ooty, Mysore and more. Wherever you go in the south you will uncover splendid relics of the many civilizations that have inhabited this land over two millennia. South India’s culinary variety and mélange of dining options are an adventure in their own right. South India is generally pleasant throughout the year and the monsoons brings some relief from the heat.

East India, the ruling ground of many ancient empires, has a strong ethnic culture and religious roots. Kolkata, is the largest city of East Indian region, located in the state of West Bengal. The East of India is largely undiscovered by overseas travelers and mysterious to many. The climate of eastern India is affected by the Himalayan system and is generally warm and humid with the high temperatures ranging between 35 to 40 degree Centigrade. Heavy rains occur between May and September. The best times to visit is October to April.

West India greatly differ from other Indian regions in terms of language, culture, and levels of economic development. It is a magnificent kaleidoscope of cultures where distinct religions, traditions, and lifestyles mingle to thrive and prosper. Maharashtra, Goa, and Gujarat are the part of this region and this has few of the most progressive states of the country. Goa, is one of the most popular and tourist friendly state which has something for everyone. Best months are October to March as the weather during these months are perfect.

Central India gives us a peek into the splendid wildlife, rich heritage and architectural splendors of India. The states which are part of Central India are Madhya Pradesh and Chattisgarh. These states hold enough pilgrimage spots, wildlife sanctuaries, ancient monuments, mountain ranges and remote forests. Some of the most popular places are Khajuraho, Orchha, Sanchi, hilly town of Mandu and the contemplative towns of Maheshwar, Omkareshwar and Amarkantak. This region also incudes no less than three national parks and 11 wildlife sanctuaries. The best time to visit this part of India is between November and February. Most of the National Parks in India remain closed in the wet monsoon season from July to October.

The West and East Coast of India has some brilliantly unspoiled islands which are even mysterious to many Indians. The Andaman and Nicobar Islands, are famous for their long and beautiful beaches and are great for sunbathing and water sports including scuba-diving and snorkeling. The highlight of your travel will be the amazing beaches of the many islands that have regular boat service from Port Blair – Havelock Island, Long Island, Neil Island, North Passage Island, Mayabunder, Baratang, Rangat, Diglipur, Cinque Island and ChiriyaTapoo. The Lakhswadeep Islands are a stunning archipelago, set like gems of brilliant coral reefs well off the coast of Kerala. 5 islands are open to tourists and only 2 to foreigners. The best months to visit are between November to May. 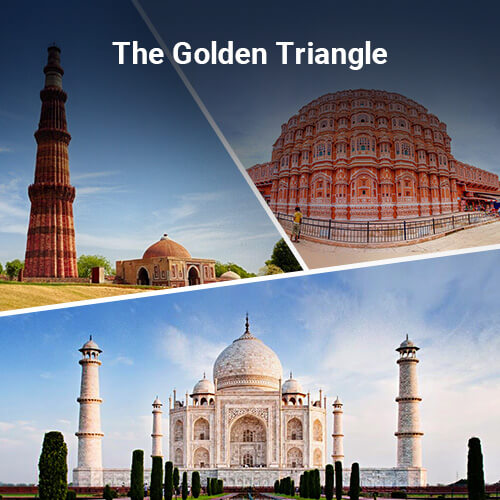 This is the most popular tourist route in India, which showcase three cities for very good reason. This tour is called as Golden Triangle because of the triangular shape formed by the locations of New Delhi, Agra and Jaipur on a map. These cities will take your imagination into the fascinating, decadent and passionate world of the Mughals and Maharajas. On this tour you will experience the world’s best architecture, from the Qutab Minar in Delhi to the Amber Fort in Jaipur and of course the Taj Mahal in Agra. This tour can be covered even if you have five days in your hand. 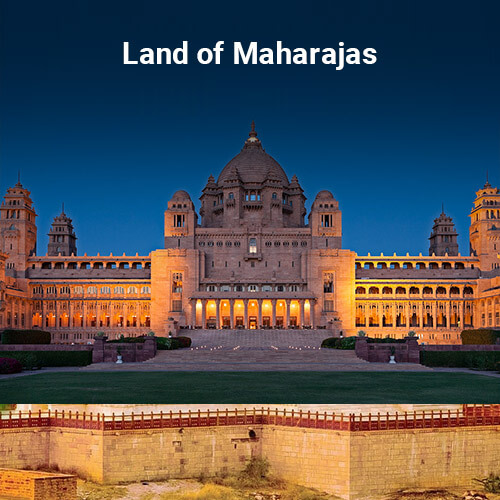 Around the “Land of Maharajas”

A stylish north India experience. The itinerary offers, travel through colourful state of Rajasthan, which is a magical land full of cheerfulness and quintessential charm. You will be staying in some of the most beautiful and boutique hotels in India. Each of these hotels have been specially selected to compliment each other. Some of them are privately owned by the erstwhile aristocracy lending them a trademark sophistication and a traditional warm Rajasthani hospitality. 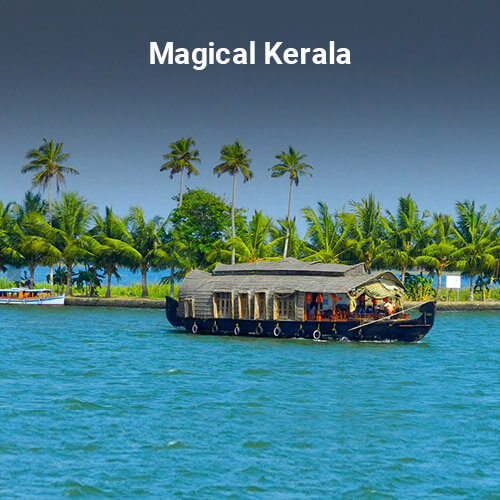 Kerala is one of the most prominent tourist destinations of India. Coastal Kerala boasts of emerald green paddy fields, groves of coconut trees swinging in the gentle breeze, rolling hills with acres of tea plantations, eternal rain forests, and the maze that is Kerala’s backwaters located tantalizingly close to sandy beaches of the Arabian Sea. The backwaters of Kerala are a labyrinthine system that consists of lagoons and lakes which are linked through many canals. The beauty of Kerala has helped it to be named as one of the ‘10 paradises of the world’ and one of the 50 must see destinations of a lifetime by the National Geographic’s Traveller magazine.

Across the Heart of India

Travelling across central India gives you the chance to see some of the country’s most compelling attractions, thrilling wild jungles to serene places of worship. You will be visiting the dynamic and exhilarating city of Mumbai followed by Aurangabad which has breathtaking cave sculptures and carvings at Ellora and Ajanta. Visit the very central medieval temple complex in Khajuraho followed Varanasi which is the spiritual capital of India. 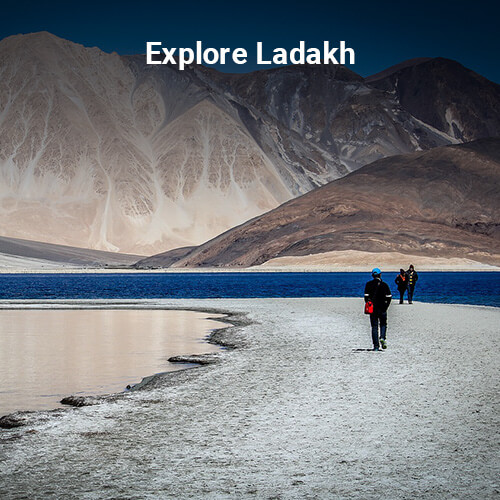 A voyage to the far-flung corners of India, where the country reaches up into the Himalaya. Based around the city of Leh, capital of the former kingdom of Ladakh, this high-altitude trip introduces you to monasteries and monks, roads that climb past glaciers over the highest passes in the world and sandy deserts on the valley floors. Drive through one of the world’s highest pass to the Nubra Valley, visit local monasteries and magnetic hill- a striking optical illusion. 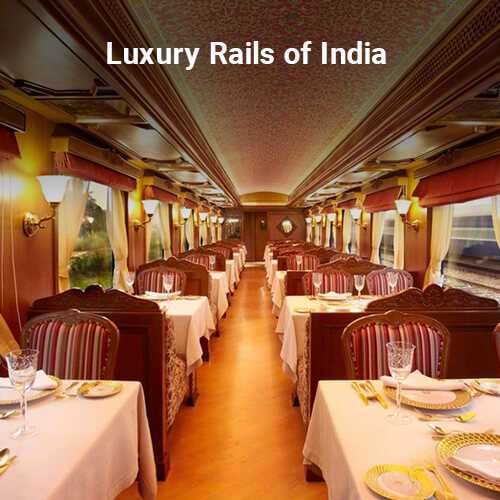 Live your fantasy of experiencing the grand royalty and traveling back in time by taking a tour of any of luxury trains in India. India has total of 7 luxury trains – namely Maharajas’ Express, Palace on Wheels, The Deccan Odyssey, Golden Chariot, Royal Rajasthan on Wheels, Royal Orient Train, and Fairy Queen Express. These super luxury trains cater to tourists who wish to explore the rich cultural heritage of India in the lap of luxury. Board these luxury train in India to explore India in ways, not possible otherwise.

You will be required to have at least 6 month valid passport from your country and a visa from an Indian mission abroad to enter India.

E-Visa facility is available, for details please visit https://indianvisaonline.gov.in/visa/tvoa.html
Citizens of Bhutan, Nepal and Maldives do not require a visa to visit India.

Persons of Indian Origin and Non-Resident Indians who possess either an OCI or a PIO card, which are the equivalent of a long India visa.

Tourist Visa: Up to 6 months. Apply with: documents supporting your financial standing.

Tourist Visa: Maximum period of 15 Days. Apply with: Proper supporting of onward travel to a destination outside India.

Some commercial offices operate on a five-day week. They have Saturdays and Sundays as off. Others work a half-day on Saturdays. Office hours are generally from 09:30 – 18:00 hrs.

Most of the shops do not have any standard timings. In major metro cities, you may find malls and department stores open until 20:00 hrs, seven days a week.

India is a tropical country, the coolest months are from mid-November to mid-March, which is the best season for tourist. In the south, day temperatures, even in the winter months can be in the mid-20s centigrade, though the nights are cool. Central India, and in the hills in the southern part of the country, night temperatures can be as low as 10°C or even lower in winter. In north, winter temperatures can go even 0°C in the plains, and it drops below freezing in the Himalayan region. Summers are very hot, specially in the south and central part of India, and the plains in the north.

The monsoons, the rainy season, are from June until September, with different levels of intensity in different parts of the country. The West Coast and the north-east get the heaviest rain (two towns in Meghalaya vie for the title of the place with the most rainfall in the world).

Winter – In South India, in the hills, you may need a light jacket in the evenings and early morning. In the north, you may need to dress warmer, with light woolens even during the day. Consider dressing in layers and carrying a small day-pack to stow away some clothes as the day gets hotter.

Summer – Light cotton tropical clothing will be good. Sun hats or caps, and sunglasses are recommended. For those travelling in the hills or mountainous areas light woolens may be needed for the nights.

Most of the hotels, shops and restaurants accept major credit cards such as American Express, Diners Club, Visa and Mastercard.

India uses 220 volts AC 50 Hz, however, it is possible that certain areas have DC supplies. It is advisable to check before using electrical appliances. Generally socket sizes varies, so it is good to carry along a set of plug adapters.

English is widely spoken in most of the touristic cites of India. But the accents and grammar may vary considerably. Hindi is the most widely spoken in the country, but it also has regional variations and accents. Apart from English, there are total of 15 major languages and 544 dialects spoken in India.